First stage over, just waiting for dinner. Bikes washed and half the legs rubbed.

Today was grand for 120 kilometres with no mention of any of our lads.

Next thing the solids hit the air conditioning when race radio announced that 2 navan riders had fallen. Stuart cox and Stephen Byrne ended up in the ditch and Stuarts bike was messed up but they rode really well to get back into the cavalcade.

After another 15 kilometres, they were just back on when a blanket crash blocked the road and they had a dead stop as cars emptied with people seeing if their riders were ok.

One of the fifty riders who was delayed was John Murray and despite an average speed of 45 kilometres per hour for the stage into a headwind they limited their losses to less than 3 minutes.

Overall, despite bad luck, the guys rode very well and are in good form.

Blair Clinton’s Chekhov Cafe bars have been hidden from the riders because Simon and PJ have decided to eat them all themselves – they are godly and should be franchised worldwide.

Thanks to all the club members for their support along the road.

Thanks to Sean Nolan for cleaning the bikes after the finish we considered kidnapping him for the week but he escaped.

The hotel, Hannons in Roscommon, is magic. 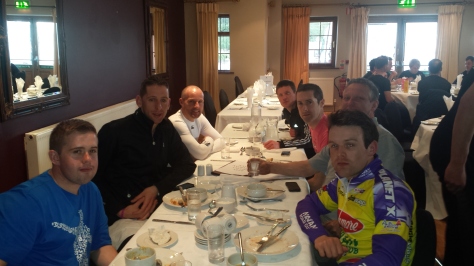 The cavalcade driving is not helpful to riders trying to get back on but we will teach them yet. Simon can drive – it’s amazing what 2 days driving a wind up forklift can do for your driving skills.

Tomorrow we are off to Lisdoonvarna – it will be interesting
My prediction = rain, line outs and bigger time gaps than an Ironman